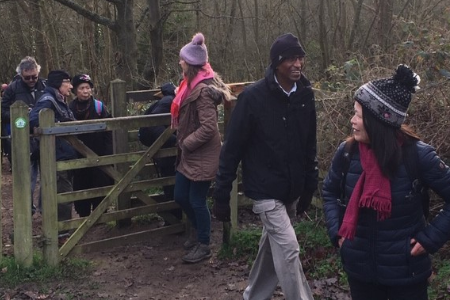 The Ramblers is a charity whose goal is to protect the ability of people to enjoy the sense of freedom and benefits that come from being outdoors on foot.

Ramblers want cities designed to encourage people to go about their everyday lives on foot and is campaigning to make London a great walking city. We want a London where walkers count, whether they’re walking for leisure, pleasure, adventure, shopping, taking the kids to school or part of an active travel commute.

Our project aims to improve and promote the use of the Capital Ring footpath – which runs for 75 miles around London – to communities living near it north of the river. The project encompasses improving signage, litter-collecting, pruning back undergrowth and running short led walks on the route for people living locally.

We are aiming to work with other charities and community groups, to support those who don’t normally walk to get walking, and to show them the sometimes surprisingly beautiful places on their doorsteps where they can walk. Waymarking improvements will make navigating easier, and litter collecting and pruning back undergrowth will make walking and exploring more pleasant and enjoyable.

We were about to start scheduling our first walks when Covid-19 started to impact the UK and, as the country went into lockdown, it became apparent that we had to put the whole project on hold until restrictions eased.

However, towards the end of July, came the announcement that Ramblers is able to re-start its led walks programme for up to 30 people and, as other volunteering activities can also resume, we’re now able to start up our project again - although on a smaller scale than originally planned as we have lost the spring and so much of summer.

Over the last few weeks, we have been preparing for this, making contact with other groups with whom we plan to carry out joint litterpicks on sections of the route and ordering our waymark discs so that we can start improving signage. We recruited a team of volunteers to look after the Capital Ring last year, so we’re re-energising them to pick up where they left off, auditing and monitoring the route and updating the outdated written instructions for walking it on the TfL website.

Since resuming our programme, I have scheduled eight free led walks – from an original proposed 12 – with the first three scheduled for August. Two different walk routes are planned, both circular walks of around two hours long at a leisurely pace.

One walk starts outside Wembley Park station and follows the Capital Ring route over Barn Hill and through Fryent Country Park. I was there yesterday, removing muck and graffiti from some waymark discs and enjoying the fabulous sunshine and views – it felt like I was in the countryside, yet I was so close to built-up areas.

The other walk starts near Greenford Station and follows the Grand Union Canal to Horesenden Hill, the site of an ancient hillfort and the largest nature conservation site in Ealing.

If you’re keen to join these strolls, come along to our walks as we are planning to run some sessions in August, September, October and early November. Details of the scheduled walks can be found on our website.