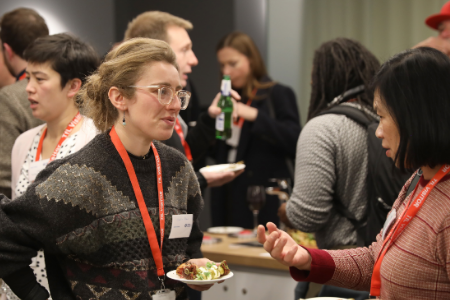 On the 4th December, we celebrated the achievements of Cycling Grants London projects at the 2018 Celebration Event. The event was held at TfL’s headquarters in Stratford.

This year we not only looked at the accomplishments of the past year’s projects, but for the first time ever, we also welcomed newly awarded grantees. We had a total of 42 guests on the night, 18 of which were people from newly awarded projects.

At the evening we were joined by special guest speaker - Will Norman, Walking and Cycling Commissioner - who discussed all things to do with cycling within the Capital and London's wider sustainable transport strategy. There were also presentations from members of Groundwork London (CGL’s administrators) and current CGL projects, who all shared their experiences from the past year. At the end of the evening there was a networking session, which posed the perfect opportunity for projects to converse, form connections and share ideas in everyone’s mutual dedication to getting more Londoners cycling.

The evening kicked off with a presentation from Martin Petry, Groundwork London’s Programmes Officer (Grants), who welcomed attendees and spoke about CGL over the last year with key headline facts and figures.

Will Norman, Walking and Cycling Commissioner at the Greater London Authority, then spoke about the aims of the GLA in increasing journeys by foot or bike, and the impact that CGL projects can have on those aims.

A short film was then shown which showcased three projects which encapsulate the diversity and breadth of CGL. The film included interviews with Bike Buddies; who fix and donate second-hand bikes to refugees, Build and Earn a Bike at Clapham Park; who teach adults basic bike building and maintenance skills, and Kids on Wheels Croydon; who bring cycling opportunities to disabled kids in Croydon.

Three groups were then invited to give short presentations on their experiences, challenges and successes from the past year. Stewart Vanns from Community Cycleworks spoke about 'managing a rewards system' where children can either pay for bike parts or work in his bike shop to earn TOIL money. Lawrence Mohammed from Probike Service presented on his method of ‘managing gifts/donations’, and Natalie from Stars n Stripes spoke about ‘working with kids’ and how to maintain engagement.

At the end there was an award ceremony where certain projects were recognised for special achievements.

Prizes were awarded to groups for the following categories:

The achievements of this year’s projects have been outstanding, and it is events like these which really put into perspective the community CGL has created, and the huge difference these projects are having in getting Londoners cycling more often and more safely. The numbers speak for themselves as in 2017/18 we’ve seen: 64 active projects in 32 boroughs, 574 bikes refurbished, 555 rides organised, 7,523 participants and 2,122 people gained new bike maintenance skills.

After the event, Martin Greaves from Middlesex Association for the Blind, said: “I just wanted to write to thank you for a lovely evening and the lovely award we received. We are genuinely thrilled by the fact that this project seems to have struck a chord not only with you, but with others too. Thank you again for all your support for us throughout the year”.