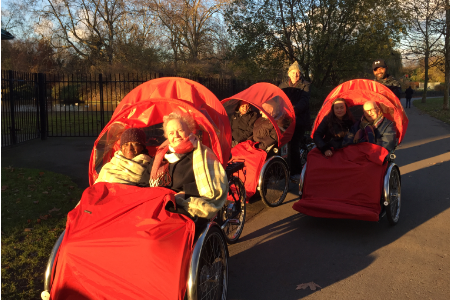 *This blog post was written by Alex Evans, Director of Time & Talents. The interviews in this article were carried out by Age UK’s The Wireless, and you can hear them in full here. Thanks to Julie Banks and the Wireless for their great programme about the project.

Cycling Without Age in Rotherhithe

Cycling Without Age is now well known across the world, but one of the livelier chapters is right here in London, in Rotherhithe. At Time and Talents, our goal is to build fun, friendships and mutual support in our community. We’re based out of an Old Mortuary – much nicer than it sounds – in a leafy part of London. Come past the roundabout, and you’ll find a small park which looks idyllic and rural – but is surrounded by some of the most deprived estates in the UK.

Here we have a community with an extremely isolated ageing population, as well as a newer, younger population – who often feel like they have few reasons to meet. We decided to set up a CWA because it was so well-aligned with our vision of a world where everyone feels part of a community – regardless of age, background, or status. What we have found is that if we put people who wouldn’t normally meet each other in the same place, all sorts of magic happens.

Running for nearly two years now, our CWA project has trained around 40 people or ‘pilots’, and delivered an opportunity for older people in more than 10 local sheltered accommodations and care homes to feel the benefits of cycling. The project is now funded by Transport for London’s Cycling Grants London and Team London Bridge.

Our staff at Time and Talents were not all, it must be said, initially avid cyclists. I personally hadn’t ridden a bike since I was 12. Others came in on a bicycle but wouldn’t consider themselves ‘cyclists’ in quite that ‘very London’ way we all recognise!

We remember vividly the day the 3 Christiania bikes arrived, in the biggest lorry we had ever seen. Overseen by our smiling colleague, Andrea from Cargobikelife, they seemed enormous and slightly terrifying. Would they fit? Would we really be able to ride them? Would older people feel confident? Would we and our volunteers feel confident?

We were thrilled to find that, yes, they fitted. Yes, we could ride them – even I managed to do so, and was so excited after doing so, that I couldn’t sleep that night. Then we began to be contacted by volunteers from as far away as the US asking if they could volunteer. We then started training our first pilots.

The trishaws immediately had a magical effect. Despite our long history of fun services for older people, for some years, the sheltered accommodation right next door to Time and Talents had been strangely separate. We’d been trying for many years to encourage greater involvement from residents, but were so often politely declined.

Then, the first day the bikes came out, something changed. Chinks in net curtains appeared. We knocked on doors and with a little coaxing, people were on the bikes, whizzing over to beautiful Southwark Park.

Two years later, we remain delighted by how happy the project makes people. First, there is the sudden mobility it gives to older people; and then there’s the sense of being able to experience something outside the every day.

‘My daughter won’t believe it when I tell her this,’ said one passenger. ‘She’ll say “who talked you into that?!” She knows how I tend to keep myself to myself. But I was just going to sit and listen to a book when the nurse came and asked me and I thought: why not? The sun’s shining.’

The difference it makes

One lady in her eighties told us that despite living literally facing Southwark Park in sheltered accommodation, she hadn’t actually been in the park for 15 years. Now very frail, she had only been able to get as far as the gate – and what was the point of that? Sitting in the back of a trishaw, with her carer beside her and one of our young volunteers in the front, she and her friends could now enjoy a full circuit of the park – not to mention at least one ice cream and one cup of tea each – on a sunny spring day.

Another said, ‘I used to be a great walker. And I so miss that sometimes. Just being out. You come to the door and you look out, and you think… I do miss that.’ There can be few opportunities to get outside for many older people; some only see the outdoors when transferring between a day centre and a care home.

The project also gives prominent visibility to older people. All too often, as people get older, they are shut away from public view. Their lack of mobility means they feel, and often are, forgotten. But this project changes that. Indeed, it’s nice to be the centre of attention: at least 80% of people who get into the seats of our trishaws do a royal wave. It’s good to feel important sometimes.

The fact that everyone you pass waves back makes all the difference too. Everyone smiles when they see the bikes go by. At Time and Talents, we believe in making communities visible – the trishaws with pilots and older passengers happily pootling through the park, is a great way to say to people, look: here is your community, in action. It’s a great place to be.

Volunteers love the project too. Eleanor, who lives very nearby, says ‘I really love cycling. It’s what I do. It keeps me sane, and I also really care about projects that help the elderly. I can’t usually be involved because I’m so busy, but this is right on my doorstep.’

Other volunteers tell us how much they like meeting people: ‘It’s interesting some of the people you meet. The lady I took out last week used to be a cinematographer and we talked all about the films she used to make. By coincidence there was filming happening in the park and we got talking about what kind of a production it was.’

A world where everyone feels part of a community

Time and Talents is already very intergenerational. Much of this is driven by an understanding of our history. We were set up 131 years ago, by ‘women of education and leisure’ – better-off young women who had an education, but were who were despairing of a life of looking pretty and being quiet when the men were talking. Of course, by the 1930s, the earliest members were in their eighties. Time and Talents had expanded to support their children and grandchildren (as well as men), and the whole community – bluestocking debaters and suffragettes sat alongside toddlers and youth.

So many ‘projects’ that are run these days are focused on dividing people with ‘needs’ into ever smaller groups, with ever more ‘targeted’ interventions. We’re proud to provide a whole place, with a whole offer, to a whole community.

That said, it’s very easy to have people simply sitting ‘alongside’ each other, rather than genuinely building connections. That’s why at Time & Talents we strongly believe in providing ‘excuses’ for people to spend quality time together; especially people who would never normally meet, to build those friendships through shared activity and purpose.  Cycling is one thing. Pizza workshops, or gardening, might be another. Our ‘Crafty Beasts’ activity brings together elders, mums, dads, and children for arts and crafts.

Each of these things attracts slightly different people – but all of them have certain human needs, things that most of us enjoy and things that connect us with each other. Whether that be eating, being in nature, doing things with our hands, feeling the wind in our hair. All of them help us feel a bit more human – especially when we do so together.

The reason why we love this project, is that those bright red trishaws, whistling through the parks and backroads of London are a ‘vehicle’, as it were - for our core purpose of creating a world where everyone feels part of a community.