Back to blogs
Sep/2019 , Hornbeam Joyriders
Good deeds on bike 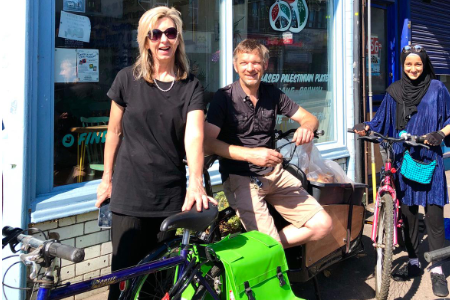 Good Deeds on Bike
By Emma, Hornbeam Centre and Café

The Hornbeam Café and Centre based in Walthamstow is 25 years old this year (woo hoo!) and has always worked to promote sustainable living in the local community. Recently it has had a large focus on ‘food rescue’, or food waste reduction projects, which includes the flagship ‘People’s Monday’ where volunteers from the local community come together to cook a meal from surplus food, which members of the local community sit down and enjoy together at lunchtime.

Alongside this, the Hornbeam also has a focus on encouraging cycling as a sustainable and low cost form of transport, which gave rise to Hornbeam Joyriders, another hugely successful Cycling Grants London (CGL) project, funded by Transport for London’s Community Project programme, which enables members of our incredibly diverse borough to discover the joys of cycling through social led rides.

Our new CGL funded project ‘Good Deeds on Bikes’ neatly marries these two aspects of the Hornbeam - providing a way for cyclists to use their skills to ‘do good’, primarily tackling food waste in the community. In practice, this has involved recruiting cycling volunteers to pick up surplus food from local businesses, bring it back to the Hornbeam where it gets sorted, and used within the Café, or redistributed by other cycling volunteers to local food banks and community centres. This saves the food from landfill and ensures that the quality surplus food reaches people’s mouths, especially those most in need within the local community.

Initially when the project kicked off in January with a shiny new poster and volunteer processes in place, I was apprehensive whether we would get a response, or find anyone who had the perfect combination of free time or means and inclination to get involved.

I shouldn't have worried! The response has been overwhelming, and not only are lots of people interested in getting involved, they are incredibly dedicated and passionate about the cause.

We have a WhatsApp group with over 30 volunteers, which I use to coordinate the deliveries, and often within minutes of posting a collection that needs covering I get a response - even first thing on a Saturday morning, when a Coop store suddenly realises they have surplus food they would like us to save from landfill!

Since the collections started in late January 2019, I’ve  been able to scale-up to having 20 regular collections and deliveries a week, around 20 hours of volunteer time being given in total per week and assistance with around 400kg+ food being saved every week, which is just incredible and demonstrates the amazing power of cycling to do good!

I was also worried about how people would manage to carry the food on their bikes, but it’s incredible how people have found a way - rucksacks, panniers, bungee cords, trailers, cargo bikes usually used for the school run, and even a partnership with Zed (Zero Emission Delivery) bikes, where they allow their drivers to use their bikes for collections if the drivers are able to give the time as volunteers. Several of the stores we pick up from started off by asking ‘where are your cars?’ but they've got used to us now!

I think the key is that the volunteering involves doing something that our volunteers enjoy - cycling! It is a great excuse to do more of it with the added ingredient of feeling deeply satisfied about what you have achieved. The results of the volunteering are incredibly tangible, volunteers can literally see the food they are ‘rescuing’ from landfill as they pile it up on their bikes and stuff it into their panniers. Or delivering to food banks where they can see future recipients eyes light up as they carry it in. One volunteer was particularly moved delivering to a food bank and being thanked by those waiting in the queue when he arrived.

And as with any project there has been so many little stories that have come out of it. Several volunteers have chosen to take their children with them on collections (even babies in trailer), giving the chance to educate the older children about food waste and to spend some time with their family on a local bike ride. We’ve had volunteers squeezing microwaves into trailers in order to recycle them and endurance cyclists using the project as a way to train! All in all it’s been wonderful seeing the community in Walthamstow come together to achieve something big through the sum of lots of small parts.

I hope ‘Good Deeds on Bikes’ will go from strength to strength, but I’ve certainly had my heart warmed by the response so far and the achievements we’ve made!