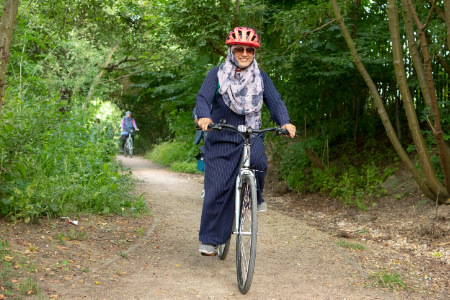 How Hornbeam JoyRiders got me back into cycling

I didn't think it would be easy riding in an abaya, but once I figured which was the right one to cycle in, there was no stopping me.

At first cycling for me was just a social thing, but after receiving some really positive comments from the public on our rides it boosted my confidence and now I'm cycling everywhere!

Before my four children came along I enjoyed exercise like aerobics, walking and swimming, but in recent years my fitness levels had declined. I had become more sedentary, as it was so much easier and quicker to drive rather than walk.  So when the opportunity came to re-learn cycling after 25 years, I took it, and it really is true - you never forget how to ride a bike!  After I had completed my cycle training as funded by TfL’s Cycling Grants London, I was more confident on a bike but not too sure about going on main roads with all the traffic. It was only after I started riding with JoyRiders on the led rides that I became more confident about navigating the traffic using cycle lanes on main roads and finding dedicated cycle paths in my area. I love discovering places that I otherwise would have missed in a car, such as pretty little side street cafes and the canal towpaths.

I enjoy being able to get from A to B independently and without the frustration of being stuck in London's ever present traffic. It's a benefit to my mental and physical health.

My husband saw a positive change in my confidence and was so impressed that he bought me a bike as an Eid present. I'm using my car nearly as much as my bike now and am taking any opportunity to go out on rides. I've increased my energy levels and my stamina. I used to feel a real slump when the kids got home after school but now I find I'm a lot perkier and more energetic!