Back to blogs
Apr/2019 , Hornbeam Joyriders
How I got back into cycling 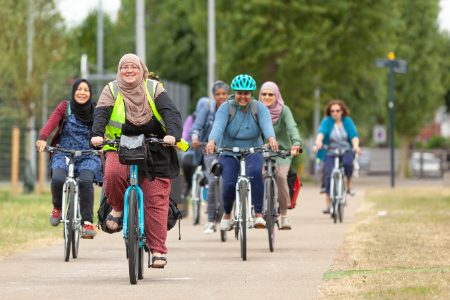 Born in the Netherlands and growing up in Germany, I was always a keen cyclist throughout my life, using it mainly as a way of transport rather than leisure or sport.

When at the age of 28 I moved to London, I came across a completely different attitude towards cycling. It was almost as if you can only do it if you at least have a high viz of some form, but even more desirable, a complete lycra outfit. Cycling just didn’t seem to be for ordinary people wishing to go from A to B, and even those who used cycling as a way to commute to work did this in Lycra, just to change then into their office wear. I found this highly irritating at the time.

Anyway, I married and had kids and didn’t much think about it, until the day my daughter told me that I’d better get a bike as she was fed up of waiting for me at junctions (she was just 6 years old and cycling to school on her little bike on the pavement).

It made me think, so I announced to my husband that evening “I’m going to get a bike”. He just told me I’m crazy - as a Muslim woman I wear Hijab, and at that time there were very few visibly Muslim women cycling in Waltham Forest.

Well, a few days later I bought a lovely old vintage bike and started cycling again. I cycled first just for the school run, but then started venturing out further away to the shops etc, trying to ignore the patronising looks of some members of our community, and often feeling pleasantly surprised about the positive reactions some people did have when seeing me on my bike.

About 1.5 years after starting to cycle again, a friend told me about Cycle Sisters, a Muslim women’s cycling group which had been founded recently, so I decided to join and signed up for my first ride. I received a very warm welcome and from then on joined regularly. I discovered so many green spaces in my local area, I didn’t even know they existed.

A while later Carolyn Axtell, founder of the Hornbeam JoyRiders women’s cycling group, put out a call for new volunteer Ride Leaders and training after receiving funding from TfL as part of Cycling Grants London. I thought “that’s just the thing for me” and so did my ride leader training with Groundwork London in February 2018. Soon after I started regularly leading rides for JoyRiders, in particular the beginner’s rides for women who’ve just learned to cycle.

Next, Carolyn was recruiting more women from minority backgrounds to train as Cycling Instructors. She and Sarah from Cycle Sisters had discovered such a big demand, particularly from Muslim women for cycling lessons that tailored to their particular cultural needs. As Cycle Instructors, Carolyn and Sarah couldn’t accommodate all of the women who wanted training. So, in August 2018 I did my National Standard cycling Instructor training and passed.

I’m now working as a cycle instructor part time and still lead rides as a volunteer with JoyRiders. Both go hand in hand, as a lot of the people I train as an instructor then progress to joining JoyRiders, which really builds their confidence and supports their development as cyclists.

Now 10 years after I first came here, Waltham Forest just seems like a transformed place, with so many people cycling and using it as a means of transport. Seeing Muslim women cycling independently is now a common sight and the infrastructure to support this is in place.

I count myself as very lucky to live in such an amazing borough and be part of a great movement empowering women not only to cycle, but to realise through cycling that they can actually try out new things and succeed.