Back to blogs
Sep/2016 , Wheels for Wellbeing
How to pilot a tandem at the Olympic velodrome 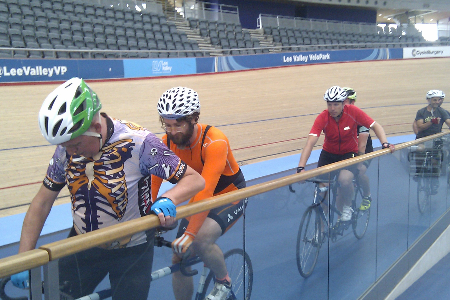 I’d been a keen cyclist since moving to London 6 years ago – around the city commuting or out to Essex and Surrey on longer rides. I enjoy the feeling of travelling from once place to another under my own steam. It’s something that I think everyone should have the opportunity to take part in.

That’s why I started volunteering for Wheels for Wellbeing on their Cycles for 2 Ride Out project. It gave me the chance to bring the joy of cycling to visually impaired people, who are largely excluded from cycling. Even though I hadn’t been on a tandem before, I was quickly trained up as a pilot, and now really enjoy the sociable nature of cycling with another person on the same bike.

So I jumped at the opportunity to try tandem cycling at the Olympic Velodrome in Stratford. Once I got into the middle of the track and saw the 43 degree banked corners my excitement quickly turned into trepidation! The thought of going round on a standard bike was scary enough let alone a tandem!

We were given some training on the fixed gear bikes, which have no breaks! The instructors at the Velodrome were really good at talking us through the different lines on the track and cycling in groups. They explained the way the track and the bikes worked.

Then it was time to try the tandems! These were also fixed gear with no brakes. After being paired up according to size, it was then time to try our skills on the track. Starting off was a bit wobbly, but once you got going it was great fun.

All the participants at the track were sighted. In order to start the training process of how to pilot a tandem with a visually impaired ‘stoker’, we took it in turns at the back of the bike with our eyes closed. It was a very strange feeling – you felt like you were on the flat when you were on the banking, turning right when you were actually turning left! It gave you a real sense of perspective of the trust that visually impaired stokers put in their pilots when on the Velodrome to keep them aware of where they are and what to expect.

It was an amazing experience, and one which I hope to take part in again in the future!