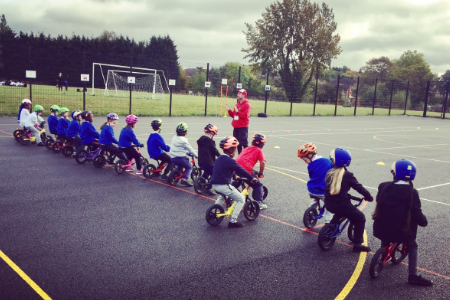 Hawks BMX in Hayes, Hillingdon, has used BMX bikes to teach and inspire young people to ride for the past eight years in the local area.

With the money we were awarded by Cycling Grants London (CGL) as funded by Transport for London’s  Community Project programme, our project delivered sessions in 2019 to four schools in six week blocks of sessions. Two of those schools had 2 x 6 week blocks with different year groups or classes benefitting.

We have delivered sessions of Learn 2 Ride to approximately 880 young people from the ages of 4 -11. This figure is double our predicted number of how many students we would engage with during our first year of this project

The project not only teaches just BMX skills, but we also taught Learn 2 Ride Balance Biking with reception and Year 1 classes in those same four schools.

We have a large percentage of children in years five and six in our local area who cannot ride or don’t have access to a bike; meaning this project was very exciting for them as they were given the chance to ride and be coached in a school.

“Pinkwell has been very lucky to have had Hawks BMX come in and work with our children. Hawks BMX generated a real buzz within our school right from the start, and this generated a really good feel factor with the children involved, who eagerly awaited Wednesday afternoons to take part in the sessions.

The interest of cycling in and around Pinkwell School has gained a lot of momentum. A noticeable indication to this is the fact that our BMX after school club for the Summer Term was the first club to be filled up. Informal discussions with students have also revealed that bikes have been requested for birthday and Christmas presents.

Having Hawks BMX in with us created such a stir that we ended up using the two curriculum sessions during the Summer Term as a reward system for class attendance during the Spring Term. The impact has been huge, creating a healthy competition amongst classes that has helped along with other strategies, such as to increase our school’s attendance figures.“

Our aim was to get more young people learning how to ride a bike, giving them the skills and foundation to continue cycling for life. With this CGL funding I think we delivered that outcome and had fun doing it.