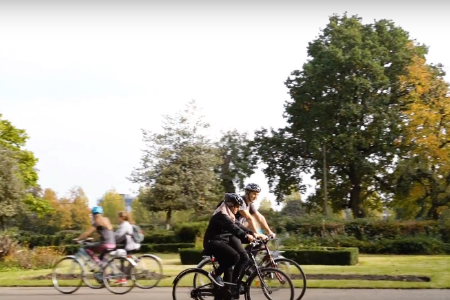 Bike Buddies is a programme run by The Bike Project, which matches refugee cyclists with a buddy in their local area to help them build confidence using their bike. The programme aims to build cycling experience, reduce isolation, improve well-being and encourage social integration and greater independence.

The Joy of Being (a Bike Buddy)

I’ve lived near Highgate Cemetery for more than 20 years and I’ve walked around it dozens of times. I thought I knew it quite well – until one day I went there with a Polish friend through Bike Buddies, a CGL programme funded by TfL. Suddenly it seemed completely new and exciting; names of gravestones that meant nothing to me, meant everything to her. Every second one seemed to be a Polish hero of some kind, and so over the course of an hour and a half, I got a crash course in Polish history – and its connections to London.

In a similar vein, I’ve been cycling in London for 35 years. I do about 100 miles a week and I have no regular commute. I like to think I know the city and its roads pretty well, but being a Bike Buddy allowed me to see the city anew. Things I thought were routine (the river is tidal, most bike shops let you use a pump for free, there are only three cycle paths in Hampstead Heath etc.) were all news to my cycling companions. But so were many things to me: who knew that the word “Trafalgar” comes from Arabic?

But I suppose that what I’ve enjoyed most about volunteering as a Bike Buddy is the opportunity it gives to ask new questions. It always starts with a conversation: “what do you find most surprising about London?” On some things we score pretty well. We are, if my cycling companions are to be believed, universally polite. We are also very law-abiding; there are so many rules – and we obey them! (This particular conversation took place just as another cyclist went through a red light, but still…!)

But dig a little deeper and we can begin to see ourselves differently. All of the people I’ve cycled with have had university degrees. All of those who had jobs in the UK were working well below the level of their knowledge and experience. All were passionately interested in politics. So one day, one fellow cyclist asked a question that took me by surprise. “London has so many statues,” she said, “are there any of women?”

Well, yes, there are – but not many. I did a bit of research and planned a route. We started at the memorials to Edith Cavell (opposite the National Portrait Gallery) and Florence Nightingale (Waterloo Place). From there it was a short hop to Victoria Tower Gardens and the statue of Emmeline Pankhurst. Then we headed north where we found Margaret MacDonald spreading her wings in Lincoln’s Inn Field, and Virginia Woolf in Tavistock Square… and on the way passed innumerable statues to men.

“Well, it is better than nothing,” said my companion. But the statue that held her attention longest was Noor Inayat Khan, the Second World War SOE spy and soldier commemorated in Gordon Square.

“The government put this up?” she asked.

“I think it was the public,” I said. “People donated money because they thought it was important.”

My Bike Buddy shook her head. “I don’t know if I will ever understand England,” she said.