Build and Earn a Bike in Clapham Park 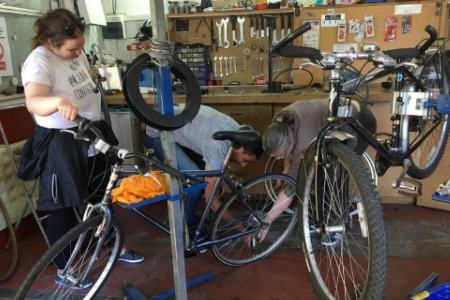 Clapham Park Project has been awarded a 2-year grant from TfL’s Cycle Grants London scheme to provide a new project to teach adults basic bike building and maintenance skills. ‘Build and Earn a Bike in Clapham Park’ gives people in the Clapham Park estate cycle maintenance training, and then participants get to keep the bike for free once they have finished the work.

Clapham Park estate is a relatively deprived area, with 27% of residents aged 18-74 either unemployed or economically inactive. Build and Earn a Bike wants to help alleviate this.  They want to target two groups: those who are looking for a job to use the bike to travel to interviews or work, and parents who cannot afford to buy a bike but whose children already have a bike; parents then can work with their children in maintaining their bikes and going on family cycle rides.

The sessions are weekly, with two-hour basic maintenance workshops for four participants at a time, which takes place in a shipping container workshop.  So far there are eleven people on the course, and a small waiting list. The bikes are sourced from the British Transport Police.

The community have become engaged in the project through advertising in the local quarterly magazine, which is distributed to all the households on the estate as well as the Lambeth Forum Network.

One of the course participants said: “I hadn’t been on a bike for seven years: my bike was broke. I cleaned it up and fixed it up, changed the cables, pumped up the tyres and now I am cycling again.”

News of the project has proven to spread fast through word-of-mouth around the community. The project leaders who help run the workshops say that it’s amazing to see people coming who know nothing about bikes, taking part in the workshops, learning week-by-week, and then getting on their functioning bike at the end with new confidence and skills.

Giving advice to other projects, the project said: “don’t expect a rush of participants at first, but trust that attendance will grow slowly. Sometimes when the project is free, people are more suspicious and might not initially want to come, but once you get a few people attending they can see the project is legitimate, and that word spreads”.

“It’s been really great that we’ve been able to get the funding from CGL, as without it we wouldn’t be able to get people on bikes which brings people happiness and confidence’’ – Project Leader

“My son came to the project as he didn’t have proper bike for his size. He came and had fun and got good use out of his bike. I heard they wanted to do adult courses and my son wanted me to come out with him on bike and I didn’t have one. It was a great opportunity to learn how to do it and cycle together which we haven’t done before.” – Helen, Participant