Cycling for the Visually Impaired

Back to case studies
Cycling for the Visually Impaired, Ealing, Middlesex Association for the Blind, People with visual impairments, 2017 , £ 10000 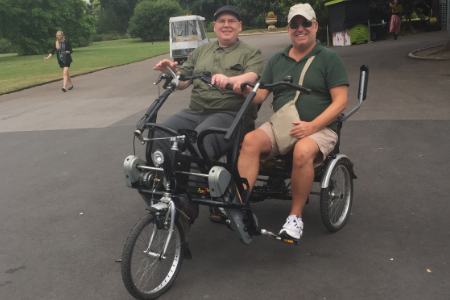 The Middlesex Association for the Blind (MAB) was founded in 1922 with the purpose of providing support to people with visual impairments (VI) in the Middlesex Region. Today they provide multiple services across many boroughs, including ‘Cycling for the Visually Impaired’.

The main focus of the project is to provide regular opportunities for VI people to cycle. This is achieved via specially adapted twin-seat tricycles, which are accompanied by a sighted rider. These trikes allow VI users to cycle on a stable platform without the fear of falling off, or the complications of steering and braking – elements which are controlled by the sighted rider.

Cycling for the Visually Impaired operates in Barnet, Ealing and Richmond, where participants regularly meet in local parks and gardens, such as Kew Gardens. Here members can enjoy riding, refreshments, socialising and peer-to-peer support. Social isolation is considered one of the major psychological conditions linked with loss of sight; therefore the social aspect of this project is highly important.

It is estimated that there are over 80,000 people in the Middlesex region who live with a visual impairment. In most cases, cycling is not an activity that those with VI can partake in alone, making them dependant on projects such as this where they are able to cycle with a guide in a traffic-free area. Having an activity such as cycling allows for physical exercise, as well as being beneficial for mental health.

As a method to keep this project sustainable, MAB are hiring their trikes out to other organisations to help cover project costs during the three years of CGL funding, and they are aiming for this to cover all project costs by year four.

When asked what advice they would give to similar projects, they said that the key is in having wonderful volunteers, as without them the project simply couldn’t work.

So far, the sessions have been highly successful and extremely rewarding. Passers-by are always attracted to the trikes, and often enquire as to what is going on. Participants enjoy their trips out and have formed strong bonds with others in their groups. One particular member even goes to two of the three clubs because he loves it so much.

Participant with visual impairment, Collin, said: “Reasons why I love these sessions. One, it gives you the opportunity to cycle which I otherwise couldn’t do. I am unable to cycle outside as there are cars and it would be too dangerous for me. Two, it allows me to exercise and be outside in a safe environment”.

Participant with visual impairment, David, said: “I love it here, I’ve been before at Walpole Park, but here at Kew Gardens it’s wonderful. It is nice because some of us have physical as well as visual problems so it’s important to get out and about”.

Project Lead, Martin Greaves, said: “Thank you TfL and Groundwork for funding us. We are really pleased to see what a difference you are making to people and giving them a chance to do something normal”.