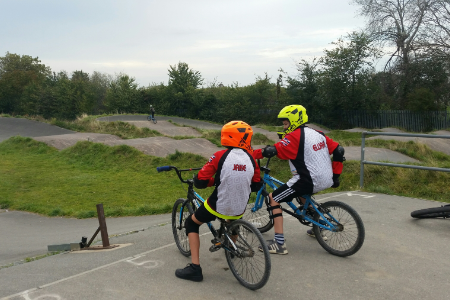 Access Sport is a charity aiming to meet the urgent need to improve children and young people’s health and wellbeing. They work solely with young people in deprived communities, with a particularly strong emphasis on young disabled people.

Access Sport was awarded £7,000 from TfL’s Cycling Grants London to support their project ‘Get Charlton Cycling’. This project aims to heavily promote and encourage cycling in a deprived area in South London through three weekly sessions and a week-long event for cycling week.

The aim is to engage young people and low-income families in Charlton with BMX sessions on the Hornfair Park BMX track. Despite sport in England showing an increase in participation overall in cycling, there is still a clear decrease in cycling in young people; especially those from low socio-economic groups. Get Charlton Cycling wants to change this.

CGL funding has allowed Get Charlton Cycling to start up a ‘cycle starters’ club, which is targeted at young people who cannot yet ride a bike and will teach them skills from scratch. Children whose parents do not cycle and who do not own a bike will be especially targeted, as without these sessions they would be unlikely to learn to ride before secondary school.

The funding also helped to: run a free after-school BMX club at the track for beginners, heavily promote a cycle-to-school week at local schools, set up a custom monitoring and evaluation framework to access the impact of the sessions.

Eliah, Year 5 said: “I think it was a really good experience to let some people that haven’t ridden their bikes to school before actually ride to school, and it was lots of fun as well”.

At the after-school BMX club, bikes and safety equipment are provided. The lead coach is from the local area and has a strong working relationship with local primary schools and the track.  The club was heavily promoted at schools through educating children about the benefits of active travel, offering prizes/incentives, and having experts attend cycling sessions to do tricks on the BMX’s - showing that cycling is cool!

When being asked what advice they would give to other projects, Access Sport said to always listen to the people you are targeting and take their thoughts on board. For example, the children said they would be interested in BMX, and so this is what the group is about.

To keep the project going, Access Sport will upscale at least 3 local teachers in cycle coaching so that they will still have the expertise to continue to give the children the skills and confidence they need. They will also continue to engage partners and organisations such as schools, the council and volunteers to ensure the after school club is sustained.

Annette, parent and BMX volunteer, said: “The bike week activities have created a real buzz in the participating schools around cycling. The children were really enthusiastic following this and we had three times as many participants at the after school BMX club after this”.