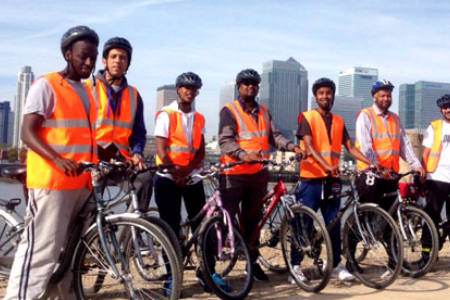 GIC CC had been running on an informal basis since August 2014 when they were awarded the CCFL grant in November 2014. Since then they have formalised their structure, becoming an official club and have been running weekly cycle rides every Sunday afternoon, having now reached seventeen regular participants.

The container will not only be used to store the bikes safely but will also function as the club’s hub with space to store tools, conduct repairs and serve as office space from which to co-ordinate activities. The club is entirely run by volunteers and follows a mentoring system by which experienced members train newer ones to help run the club, lead the rides and maintain the bikes.

The club is open to all and aims to be inclusive. Providing bikes for participants to borrow ensures that not owning a bike, a common situation for youngsters wanting to access the club’s activities, does not exclude anyone from participating. To increase inclusivity the club is assessing the best ways to encourage more girls and women in the community to participate in the club activities as less of them are attending the club’s sessions. The majority of participants are male young people but some older members of the community have been participating and enjoying the sessions as well. The club has therefore facilitated community cohesion and has helped to change the community’s perception of cycling from a risky activity to a positive and safe one.

The club is working in partnership with and is supported by the Royal Borough of Greenwich, the Charlton Community Trust and the Army.