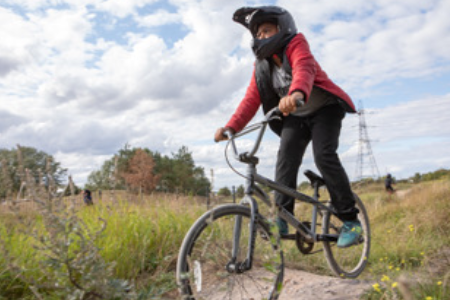 Building on the success of a summer cycling pilot, Higham Hill Community Outdoor Group (COG) decided to create a sustainable cycling Hub for the community.

The aims of COG include: getting those who don’t have access to a bike into cycling by making use of COG’s 25 donated bikes, teach participants how to ride and maintain their bikes, as well as meet other people from the local area through community rides. Other knock-on benefits are getting participants to enjoy the outdoors as well as a more healthy and active lifestyle.

The project works with marginalised groups by engaging with local schools as well as health & social care service providers, with the view to building confidence, resilience and reducing isolation.

Higham Hill COG has now grown hugely since they set up in 2016 and received TfL funding, going from strength to strength, with more and more children wanting to take part and support each other. The Hub hopes to have put a deprived part of the ward on the map for a positive reason, creating a successful participatory model that can be replicated in other areas.

COG have had some fantastic successes, like a young girl who joined without being able to ride a bike at all; then three months later taking part in BMX sessions. Another young girl was crying because she didn’t want to go on the track; six months later she won the Bronze Medal at the London Youth Games.

Giving advice to other projects, Delivery Lead David Sparks said that the best thing you can do is speak to another project that has been set up, and witness it first hand before you submit an application. He also said: "make sure you can deliver; it’s a big commitment. Don’t underestimate how much work is involved; it isn’t just two hours. Do it as you have the passion for it, but also don’t underestimate what you can achieve".