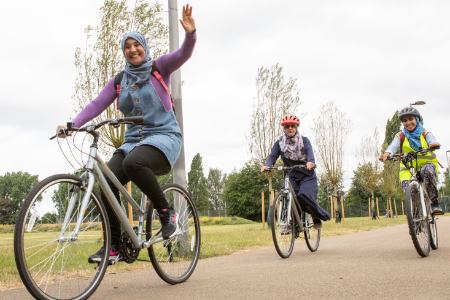 Hornbeam Joyriders Women’s Cycle Club was formed in January 2017 in Waltham Forest. Waltham Forest is a densely populated area. There are many families living in social or temporary housing, as well as a high level of adult and childhood obesity and/or physical inactivity. It is because of these social factors, as well as poor air quality and heavy traffic congestion, that the area was chosen for TfL’s £30 million mini-Holland programme for new cycling infrastructure.

The Mini-Holland programme is part of the Mayor's Healthy Streets agenda to help Londoners use cars les. It specifically addresses the demands of growth in outer London. The three outer London boroughs taking part in the programme include: Enfield, Kingston and Waltham Forest. More than 90 schemes have been proposed by the three Mini-Holland boroughs, including a range of innovative improvements for cyclists with features that make cycling feel safer and more convenient.

In Waltham Forest, TfL have introduced cycle routes fully segregated from traffic alongside other measures to improve cycling throughout residential areas. This programme has led to an increase in cycling in the area, however many women (including many Muslim women) either still lack the confidence to cycle, don’t know how to cycle, or rely on their car for even local journeys, such as the school run and the madrasa run.

Ami, a participant said: “It’s nice to meet like-minded people in the area, and it’s encouraged me to get out and about on the bike a bit more independently. I used to ride a while ago a bit but lost my confidence. The experience of group riding is really nice – I’ve never done it before, my husband has – it’s really good and keeps you going longer than you would on your own. You can also discover areas locally that you didn’t know about, like this park which is 10 minutes down the road from me!”

Men are also welcome to participate as the club is predominantly a family cycle club. Dads and children are welcome to take part in the Holiday Family Rides, as well as the Brother Rides for Muslim men and children.

Due to the new cycling infrastructure, beginner’s rides can take place on off-road local routes, and then once confidence is gained, participants can progress to on-road routes. The take up has been extremely high so far and things have progressed very quickly. Hornbeam Joyriders have a network of over 80 female cyclists, and have provided ride leader training for 13 people from ethic minority/Muslim backgrounds. There have also been 48 Women-Only led rides with 76 participants, 7 Family Rides with 88 participants, 7 Brother Rides with 20 participants, and at least 35 participants have since bought their own bikes and started to cycle independently.

Rukaiya, ride Leader: “I decided to become a ride leader so I could take the kids out. Now all my four kids have their own bikes, including my husband; we keep them out back. I am all for road awareness so that we can teach them to be safe. Before this, I hadn’t ridden since I was 8 and got back into it last year. I love having the confidence to go on my bike and be independent; I am now convincing my sister to get out on the bike, especially in a group.”

On being asked for advice for other similar schemes, Hornbeam joyriders said that the social aspect of a bike project is very important, and building on that from the beginning can really help your project. They also said to go slow and be proud of small achievements, and let things grow organically.