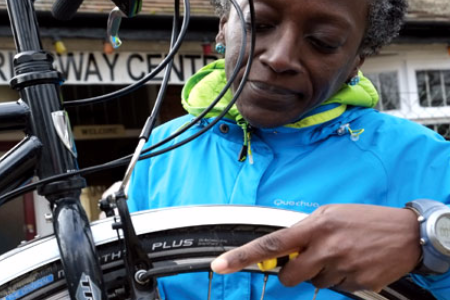 Lewisham Cyclists are an active community group, experienced in running led rides in their local area and promoting active forms of sustainable travel.

Grove Park Mend & Ride combines regular led rides with bike maintenace sessions. The fortnightly drop-in club, open to the whole community,offers a workshop space, tools and bike maintenance advice from a trained cycle mechanic and experienced volunteers. Having serviced or fixed their bikes, participants can then use them on the regular local rides, or the project has a small pool of 5 bikes to loan out, for those who don’t own a bike, but want to practice maintenance skills and join the rides.

The project hoped to increase the number of women and people from BAME  backgrounds attending, as well as families. There were at least 14 people on each of the 12 planned rides, with ages ranging from 7 to 84. A third of participants on the longer rides were women, an increase on the numbers who had attended previously and the introduction of shorter, local rides saw this increase to 50% or more (including on International Women’s Day). The drop-in maintenance sessions attracted 50% women and provided an opportunity for people on low incomes to service and repair their bikes, learning skills that they can use in the future. Pre-ride maintenance sessions also allowed people to ensure their bikes were road worthy before setting off, rather than be turned away, as some people had been in the past.

The project has strong community links and is planning rides with other local groups in the future, including a series of weekly family rides in the school holidays. With community support, they also hope to campaign for further improvements to cycling provision in the area.