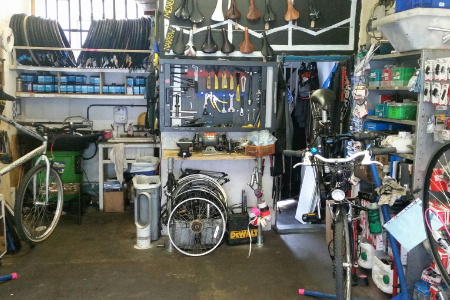 The London Bike Kitchen (LBK) in Hackney, East London, is an open DIY workshop where people can come to fix their own bikes. LBK is a non-profit organisation that teaches and supports people to become self-sufficient and proficient in bike maintenance. They hope to encourage people of all backgrounds to contribute to London’s community bike culture.

LBK has been funded by Cycling Grants London, a scheme run by Transport for London (TfL). With this funding, they have been running a pilot Earn-A-Bike project called ‘London Bike Kitchen 2’, working with the Rehabilitation for Addicted Prisoners Trust – RAPt. The project allows ex-prisoners to participate and build their confidence in bike maintenance, leading up to a Build Your Own Bike Day, where the participants get to keep the bike they have been working on.

LBK has taken on a lease for a second separate workshop/classroom to help improve and expand their services. The CGL grant is helping to fit out the new DIY workshop with specialist tools, as well as funding staff training - to start with their instructors didn’t have any official qualifications. Second-hand bikes are provided by Better Health Bikes. Participants are able to work on the bike that has been allocated to them from the onset, as well as attending workshops on technical topics such as: brake changing, cable changing, gear indexing, puncture repair, all the way up to bike bearings maintenance.

“A lot of people don’t think they can do something like this, but hand them an allen key, show them how, and it’s done straight away. Turns out they’re great at it. The learning process of the basics is pretty damn quick’’ - Nelson, Workshop Leader.

Many participants of the project do not own bicycles, or if they do, they are in poor condition. At first, participants don’t necessarily know how to take care of their bikes, and something as simple as getting a puncture can prevent them from attending work or appointments on time. They may have little access to money, lack confidence in bike maintenance, and can’t afford tools - all of which the project aims to address and change. The LBK provide a friendly space for those who feel intimidated; a space where knowledge is actively shared with customers who are encouraged to ask questions and try things out.

The workshop leaders let the participants know which bike they will eventually own from an early stage. Therefore, encouraging participants to work hard on the bike’s upkeep, which leads to individual’s developing a strong attachment to their bike with the knowledge that it will be theirs. So far, participants are eager to learn, and there have been no dropouts to the scheme as the incentive is so motivating.

There is also a ‘buddy-up’ system whereby two participants get together and work on aspects of each other’s bikes; thereby talking to each other, helping each other out, explaining and teaching each other. All classes are organic and tailored to the individuals and the bikes they are working on, resulting in some participants saying that they want to continue to do more courses and advanced courses.

"From not knowing anything about bikes, I feel confident and know what to do in case of repairs. Nelson is a great teacher and very helpful. I am happy with the bike as I’ve never owned a bike before in my life" - Robbie Cisneros.

With the CGL grant funding both staff training and advanced tools, this means that LBK will be able to create further community and outreach projects in the future too. LBK will then be able to teach more classes, and create a volunteer programme for people who want to learn about bike maintenance. RAPt graduates will be especially welcome.