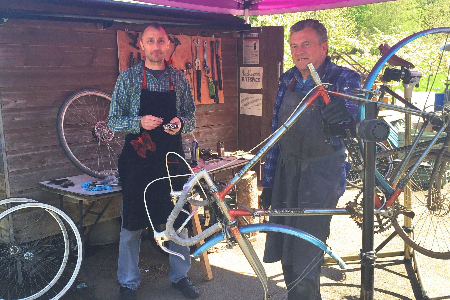 London Grown is a community food-growing project that seeks to engage marginalised communities and individuals. The London Grown Bike Project builds on the success of a pilot initiative at Hawkwood Nursery, which aimed to encourage their volunteers to cycle.

The project aims to engage the volunteers already involved with London Grown. There are over 400 food-growing volunteers, the majority of whom are unemployed or experiencing illness, having been referred to London Grown by social and mental health services, job centres and similar organisations. Their main barriers to cycling include access to bikes, confidence, fitness and the cost of bike maintenance – all of which the London Grown Bike Project actively tackles.

The London Grown Bike Project offers multiple services, such as: refurbishing old and abandoned bikes to either sell at affordable prices or give away; establishing an informal cycling club and making volunteers aware of local routes and free Cycle Skills schemes; training volunteers in basic bike maintenance so they can look after their own bikes; providing monthly ‘Dr Bike’-type sessions; and a weekly drop-in bike maintenance service for regular volunteers. All these services encourage volunteers to cycle to work instead of using other means.

Roger Skipper, who runs the bike maintenance and Dr Bike sessions, has been volunteering with London Grown for the past five years. He is trained to Level 2 EAL (Excellence Achievement & Learning Ltd) Bike Maintenance and has a passion for bikes. Making wheels and building bikes up from scratch are two of his favourite things, along with seeing the gratitude in people’s faces when they receive a custom-built bike.

“Roger keeps us all on bikes, without him we would all be walking to work!” - Participant

“One of my favourite parts of this job, is introducing new volunteers to Roger and seeing their faces when they realise they can get their bikes fixed for free” – London Grown member of staff

Roger’s advice to other Cycling Grants London projects is to think about storage space! London Grown fortunately has an established relationship with an organisation that provides them with enough space and cycle storage to carry the project over. He also recommends keeping a record of people’s appreciation. Roger has a ‘special book’ where he keeps quotes from people the project has helped and photos of people receiving their new bikes.

The Cycling Grants London funding will create the necessary infrastructure to train skilled volunteer bike mechanics and give the London Grown Bike Project a name for itself in the local community. Once the project is properly established, London Grown sees the Bike Project as being self-sustaining, since it is a volunteer-led initiative.

They would now like to replicate this sustainable cycling initiative at other food-growing sites and community projects.