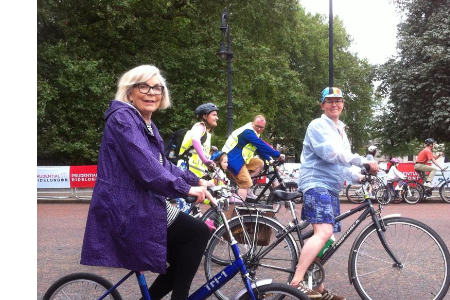 Wheels for Wellbeing have worked for a number of years with those who are often excluded, or feel excluded, from cycling due to a number of reasons.

This project aims to break down those barriers, and provide the opportunity for participants to enjoy cycling, both for leisure and for transport. It targets those who do not have the confidence to cycle and give them the resources and support to do so.

Training sessions have been held on a range of bikes, from traditional to non-standard cycles. Participants have had the opportunity to try tricycles, side-by-side amongst other bikes. The group has run sessions where participants are supported in learning how they can cycle different types of bicycles, on a one to one basis and in groups. This has led up to rides, with qualified instructors and ride leaders, within ‘safe spaces’ such as parks, away from busy roads, and other venues.

Once participants have built up their confidence they were given the opportunity to take part in led rides. These often involved an element of discovery, where routes were planned to take in unknown or interesting places. In addition to these rides, participants were introduced to the organisations bike hire scheme, which offers a range of bikes, to use on an independent basis as the participants felt comfortable with, in venues that they are confident to ride.

The group spent time accessing potential routes, often with help from participants, to ensure that they were appropriate and accessible for the types of bikes that would be used on the rides. Participants have enjoyed the ability to get on a bike and enjoy the freedom of cycling. Many had not had the opportunity to do so for health reasons, or because of a lapse in their cycling.

Whilst the group had initial difficulties engaging participants, they have used their extensive networks to engage potential beneficiaries from further afield. Participants have achieved great, things. Many attended the Freecycle event at the end of July as part of the Ride London weekend. The project, and the group’s cycle hire scheme, has provided the opportunity for many who felt cycling was not something they could do, to get involved in this activity in some way. Many have said they are looking forward to the next events.