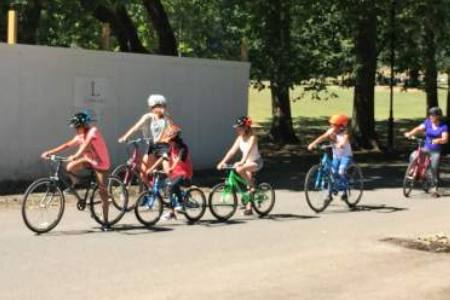 The Upper Norwood Library Trust (UNLT) is a community managed library in Upper Norwood, South London. The Trust was formed as a charity by local residents with the objective of taking over the operation and management of the library and its community hub. The trust runs courses, activities and provides facilities for the local community.

The Trust were awarded funding from TfL’s Cycling Grants London scheme to start a new project ‘Wonder Wheels’. UNLT partnered with Bromley & Croydon Women’s Aid (BCWA) to offer a cycling service to BCWA’s residents from their women’s refuges as well as outreach clients in the London boroughs Croydon,Lambeth and Bromley. BCWA supports victims of domestic abuse, they run 8 refuges that cater for up to 48 women and 60 children at any given time.

Women are typically under-represented in cycling, and women who are survivors of domestic abuse are even less likely to have the opportunity to cycle, often having had no access to finances to buy a bike, or having lived in very controlled circumstances.

The barriers which were preventing many of these women from cycling ranged from no access to bikes or bike storage, a sense of isolation, low confidence, low levels of fitness, and a lack of knowledge about maintenance as well as the cost - all of which can be overcome through Wonder Wheels.

Wonder Wheels will help to improve the confidence, health and wellbeing of women, as well as helping them to build deeper bonds with their children through gaining a new joint skill. It aims to inspire a lifelong passion and prove that cycling can be a fun and safe mode of transport. This project will help mend bridges and build new ones, making women and children stronger together through cycling.

“This is something we look forward to every Thursday. I had never ridden a bike and through your support you made that happen. ‘I’m 45, I’m too old to learn to ride a bike’: don’t say that - I’m 69 and I’m learning so you need to have a go!” – participant

“We are not able to afford our own bike, and for two years my daughter is able to ride through this experience” – Anna, Mother of two and Participant

The project is made up of a range of eight adult bikes and five children bikes, as well as e-bikes for participants with disabilities or who are unused to physical activity. There are monthly bike maintenance training sessions, weekly bike safety training sessions, National Standard Instructor training, Ride Leadership training, and lead rides.

UNLT explained that the first few sessions of Wonder Wheels started small, however through word of mouth they are now always oversubscribed. At Wonder Wheels there is always somebody new, and people running the project have seen first-hand how quickly some women have grown in confidence. For example, two participants both new to UK were initially put off cycling because of previous accidents; one of them being involved in a road accident. This project has slowly encouraged them into cycling, which they now love, even though they only initially came for their children!

“I enjoyed it. I haven’t ridden a bike for a long time; this is my second session, and I have just been on a session with me and my daughter. It’s a great experience, I never thought about me and my kids going for a ride on roads” – Mother of a participant

To sustain the project after the grant period has ended, the bikes will be added for hire at the Upper Norwood Library Hub’s ‘Library of Things,’ and the income generated is hoped to sustain Wonder Wheels into the future. The income will also allow the BCWA to work with other community groups such as Bernado’s, who have expressed an interest in working with Wonder Wheels.

If they were to give some advice to other projects applying for grants, Wonder Wheels said to plan out where you will do it. The sessions are not far away from their base, but they still have to get all the bikes there which has been a challenge, and so get storage if you can.  They also say to embark on your promotional work early, and to make it clear why it will be beneficial and what the positives are, and to trust that once people begin to come they will enjoy the project and spread the word around.  And finally, if you are working with children and adults, getting the children is easier, and then they bring the parents!