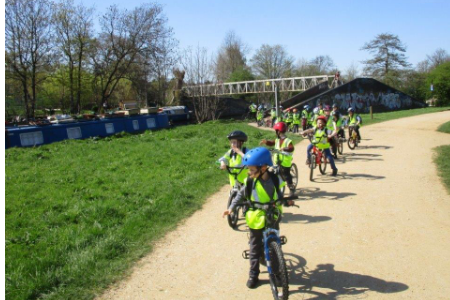 Clapton Common Boys Club was set up as a recreational foundation for young boys of the Orthodox Jewish Community in Hackney. They serve around 300 boys, offering participation in extra-curricular activities and opportunities to develop their talents and interests.

Back in 2016, Hackney Council added a cycle route in Stamford Hill. However, the borough’s Orthodox Jewish community felt that they had not benefitted from the new route, as due to cultural sensitivities, Orthodox Jews do not join mainstream activities such as cycling. However, funding from Transport for London helped Clapton Common Boys Club to set up their Cycle to Safety project, which aims to enlighten these beliefs and get the community more involved in cycling.

These young boys attend independent schools which focus on intense learning, leaving little time to exercise during school hours. Cultural requirements also affect their ability to participate in mainstream or unsupervised after school activities. However Cycle to Safety aims to encourage participants to begin cycling with confidence, and to engrain new cycling habits into the boys’ lives in a safe and culturally appropriate setting.

The project involves a three year supervised cycling training session by experienced cycling instructors, as well as mechanical sessions so the young people can learn to fix their own bike and deal with minor issues. There are six cycling training sessions a week, with three different user groups according to levels of ability and ages. The participants learn to control and master their bikes on their premises away from traffic, they then cycle around quieter streets to work on dealing with traffic and to build up to experiencing the road and traffic conditions with busier streets.

As the project delivery team are all Orthodox Jews and live within the community, they understand and respect the community’s traditions and lifestyle. What helps make the project a success is a small competition element for the children – they are encouraged to ride together, counting the timings of who achieves the most hours, and the group with the highest number of hours is rewarded with prizes or a certificate.

One project participant at first was terrified of the idea of riding a bike, however now he has got the confidence in himself, and he enjoys and loves cycling because of Cycle to Safety.

Giving advice to other similar projects, or those thinking of applying for a Cycling Grants London grant, Cycle to Safety said it’s always hard at the beginning, but to have confidence in your project, and to share your confidence with the participants. They said applying for grants can be difficult, but if you plan from the perspective of what end result you want first and then work backwards, that can help how to plan things. They also said to get whatever training CGL offers and to finally, to always be learning as you go on.

After the grant period has ended, the young people who have taken part in the training then take responsibility to care for their bikes, and will pay a minimal charge to cover the costs of hire. They will devise an exit strategy which could include further fundraising, campaigning or in-kind support, and hope to demonstrate that the project is sustainable through their tracking mechanism into the future.